This Friday I finally finished my Imogen Cowl.
I cast on in May, and somehow threw it into a project bag and forgot about it.
I lost my knitting mojo back in June, and the cowl went with it. 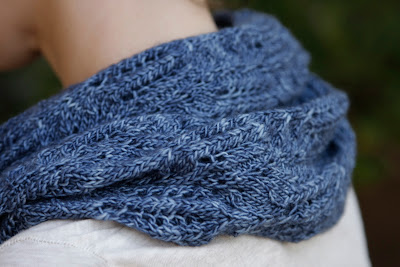 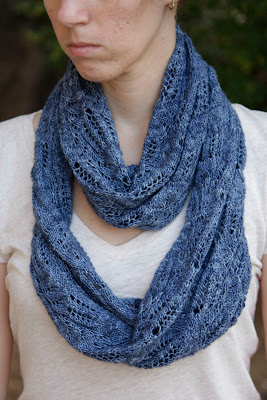 The pattern is quite easy to remember, but took me a while to "get into it". Until I memorized it, I stopped working on it.
Knit with 3.5mm needles, I'm still not sure if I should have gone up or down a size.
I also used the three needle bind off. Could not be bothered with the Kitchener stitch.
The pattern shows through, but not as much as I'd have like it to. But it could just be the kind of pattern. When bunched up around my neck, it doesn't really matter. 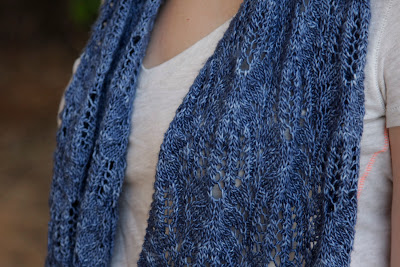 I used 1.5 skeins, 18 repeats in the end. It turned out a bit long, I was afraid it wouldn't be long enough. If I lived in a slightly cooler climate, this would be awesome to wear with a T-shirt. I'll have to wait at least another month to wear this though. Maybe in the evenings? 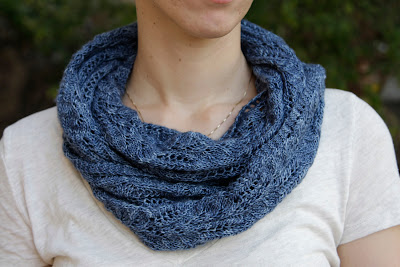 I think this is going to get a lot of wear this winter, even though I'm slightly "meh" about it now. I'm not sure why though. I love the color, the yarn, drape, what's not to love? It might just be our never ending summer has me dreading anything too hot. 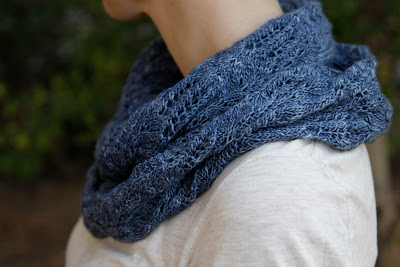 On another note, I LOVE madder patterns. Isn't the Immie baby blanket adorable? It looks like it's based on the imogen pattern, but knit with much heavier yarn. I think I'm going to have to make that blanket my next!
Posted by chanina at 10:03 PM

“After you’ve done a thing the same way for two years, look it over carefully. After five years, look at it with suspicion. And after ten years, throw it away and start all over.”– Alfred Edward Perlman